Sunday 26th Aug saw Mike compete at the final Tonfonau Round,  having sourced and put in a standard engine Mike managed to get upto fourth place and get another signature towards his national licence.

The full race engine thatvwas 84bhp is away for repair in Wales so for the next few meetings the standard 68bhp engine will be used, hoping that with some hard riding we can get a few more signatures before the end of the racing year (Mid October) 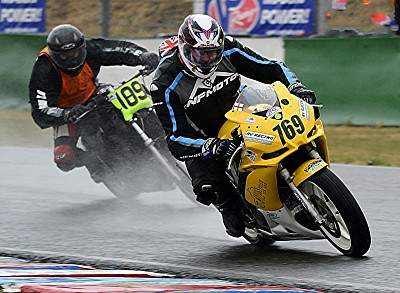 After some late night discussions I got an offer to ride the RV Racing SV in the East Midlands Racing Association championship meeting at Mallory Park 29/7/18.

Having only raced there once I struggled for pace in practice and qualified 28th of 32, but in the race managed to get upto 14th. It was quite torrential rain and having not ridden he bike before I was happy enough with the result. Big thanks to RV Racing and thier sponsors Davies Motorcycles.

First Aintree meeting today (14/7/18) bike was going great in practice but in race 1 the engine slowed and blew smoke everywhere on lap two. Suspect it's a failed piston ( we couldn't afford new pistons in the last rebuild so used the old ones)

I'll drop the engine out and see what's wrong hopefully get it going for Tonfonau in August. It sounds like it is going to be a piston and gasket set at the least 😕 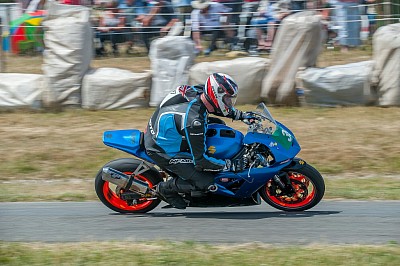 The new suit is custom made to match the bike and we think it looks great!

After a busy few weeks with engine repairs Mike competed in the Stars at Darley Moor event. The event organisers lost Mike's qualifying time so he had to start 24 out of 25 but managed to get upto 16th by the end of the race. Mike set a new personal best of 1.08.37 just over 2 seconds quicker than the same event last year! 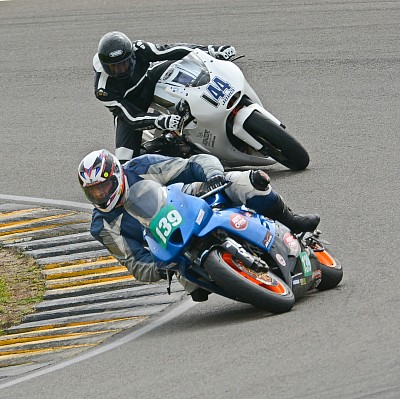 Mike visited the Angelsey circuit for the first time in a double meeting on 29th- 30th of July. Throughout the weekend he built his speed starting 30th of 31 in the first race and finishing 9th by the last race of the meeting and achieving another signature towards his National licence by finishing within 10% of the leader's time. The elevation changes were something new and an enjoyable challenge.

The 15th July saw Mike compete at Aintree where he finished a respectable 8th in the wet race early on before retiring with clutch issues.

Sunday 16th July saw Mike ride at Darley Moor though no races were finished with a continuing clutch issue.

A great day at Tonfonau on 2/7/17 saw Mike pick up 3rd place in both minitwin class races and thus get 3rd overall on the day! A nice trophy was recieved for this ( pic in gallery )  Mike also achieved the second of his 10 required signatures towards his national licence.

The 18th June saw Mike compete at Darley Moor in the Formula Darley and Mini Sound of Thunder classes.

This was Mike's first meeting with a clubman licence and therfore no novice bib!

The new engine was completed ready for use with a last min rush on the day before, having to use qualification for running in, when used in anger in the first race it was flying with lots of power,  testiment to the work that had been put in a new PB was set in every race- by the end of the day Mike's PB had dropped by 1.8 seconds to 1.09.1, and with the extra speed Mike achieved his first signature towards his national licence by finishing within 10% and on the same lap as the leader!

LICENCE UPGRADED - Mike has now completed the required race finishes to upgrade from an Intermediate-Novice licence to Clubman. This is what Mike has been working towards for the past year and a half and the application to upgrade has been accepted by the ACU.

This now means Mike can work on finishing 10 races within 10% of the leader to upgrade to a National licence. 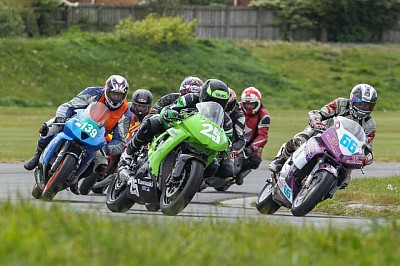 Mike competed in the first round of the Ace of Aintree championship on the 13th May finishing a best result of 8th in the Supertwin race (on the stock engine). Mike had some good races with Rich Fairclough and completed his 10th signature for his licence upgrade.

The 15th April saw Mike compete in his first race of the Tonfonau track run by Crewe and South Cheshire motorcycle club.

These finishes moves Mike onto 9 signatures of the 10 required to move onto a clubman licence.

Mike has Darley Moor on the 1st May Bank holiday; if he finishes a race it will be the final signature to complete his novice licence period.

9/4/17- The borrowed engine is up and running, though a little down on power compared to the previous and unable to run RAM-air due the some carb issues it should be more than enough to get a finish at Tonfonau 16/4/17, another new track for Mike.

Thanks to Stu Hall for working on the bike and swapping engines and RV racing for the loan of the engine.